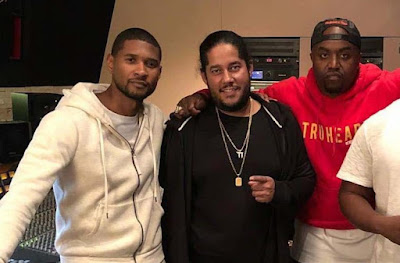 Corleone, whose real name is Donovan Bennett, told media reporters how the collaboration came about.

“I got a call from Rico Love (an American producer) one night asking me if I could come to a studio in Hollywood, California and be prepared to work. I went to the studio and to my surprise, Usher was in the studio. So, Rico said let me play something for you and he played me this demo that he did. It has only a few keys on it, so he then asked if I could make it fire with that dancehall sound. I made it on spot and it took me like five minutes to complete it,” Don Corleone told the Jamaica Observer.

Usher liked what he heard and insisted they recorded the song immediately, according to Bennett.
Bennett came up with an artiste whom he has worked with recently after Rico Love suggested they add a Jamaican female vocalist to the production.


“I cannot disclose her name due to confidentiality reasons. We recorded her the next day at Hitmaker Studio in Kingston under the guidance of my signed producer/songwriter/artiste Matthew ‘Keely Keys’ Keaveny. When Usher and Rico heard it, they both loved it,” he said.
Don Corleone expressed that the opportunity of working with Usher meant a “big achievement.”

“Well, I’m the only Jamaican producer that worked with him. This is a big achievement in my book, to be working with an artiste of his calibre. He’s also one of my all-time favourite artistes as well… He’s a very humble, talented and a cool guy,” Bennett stated.

Usher, who is one of the biggest selling artistes in contemporary music, has sold over 43 million albums worldwide since starting his career in the mid-1990s with the Antonio “LA” Reid and Kenneth “Babyface” Edmonds’ LaFace Records label.
He is known for hits such as “My Way,” “You Make Me Wanna,” “U Remind Me,” “Nice and Slow,” “U Got It Bad,” “Burn,” “Yeah,” “Love in this Club” and “OMG.”
Usher has performed twice in Jamaica. He was one of the headliners at the Sashi Experience held at James Bond Beach in St Mary in 2002. He also performed at Reggae Sumfest in 2010.
Bennett, who is originally from St Elizabeth, got involved in music production in 2001 when he worked on Sizzla’s Rise To The Occasion album. He is best known for Dancehall rhythms including the massive Drop Leaf, Junkanoo, Seasons, and Good To Go which produced several chart-topping singles locally and overseas.
Alongside his Billboard- charting singles as a producer are Elephant Man’s “Pon Di River, Pon Di Bank,” Sean Paul and Keyshia Cole’s “When You Gonna” (Give it Up to Me) and Sean Paul and Rihanna’s “Break It Off.”
Bennett produced the Sean Paul and Migos’s Body, last year. He also worked on tracks for Grammy-nominated California-based reggae band Common Kings; Sooner or Later by Mia Martina featuring Kent Jones; and Latin rapper Daddy Yankee.
He earned a songwriter credit on R&B singer Tamar Braxton’s fifth and final album Bluebird of Happiness, with the track “Empty Boxes.”