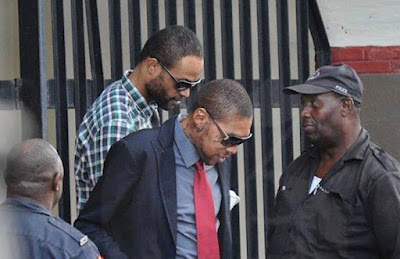 Vybz Kartel case is still lingering in the Jamaican court system with a corrupt juror on trial for bribery.
There was high drama in court on Tuesday when the case got underway in the Home Circuit Court as the female juror who served as the forewoman during the high-profile murder charge was accused of fondling a court worker. During cross-examination, while giving her testimony, attorney Valerie Neita-Robertson asked her if she fondled a male court clerk whose name is being withheld.
“Is it correct that on some occasions you would embrace [clerk, whose name is being withheld]?” the attorney asked to which the forewoman answered no. “On some occasions you, in particular, would fondle him?” Neita-Roberston pushed on to which the forewoman laugh and deny the accusations. The prosecutor also objected to the line of questioning leading to a fiery exchanged between attorneys representing both sides.
Juror Livingston Caine is on trial for allegedly attempting to bribe the forewoman and other members of the jury with a $500,000 gift. He faced up to five years in prison if convicted on the corruption charges. Vybz Kartel and three others were convicted in the trial and sentenced to life in prison.