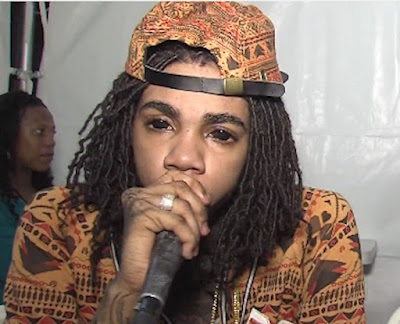 Alkaline is currently working on his next big project, his sophomore album.
Alkaline had one of the biggest reggae albums last year with his debut LP New Level Unlocked peaking at number one on the Billboard reggae album chart. After a brief stint touring overseas, the Vendetta boss returned to local soil with his first live performance in Jamaica in three years when he took the stage at New Rules last month. But since the start of the year the dancehall star has released handful of new singles prompting some fans to call for him to release more new music.
Sources inside the Vendetta camp exclusively told Dancehall HipHop that one of the reasons why Alkaline hasn’t been releasing more music is because he is working on a much bigger project. “Sometime if you listen to the fans you put out a new song everyday and that can’t work because then you ended up putting out a bunch of foolishness like some other man,” sources told us. “Right now we putting together the next big project so don’t expect a bunch of songs before that comes out later this year or early next year.”
Alkaline is having a great year on the local scene and things are shaping up to be even better for the “Extra Lesson” deejay who will be performing on Reggae Sumfest this summer. “The next album will be bigger and better than the first so look out, Vendetta,” we’re told.